October 15, 2021 News
[CHICAGO, IL] – As the MWRFU approaches the home stretch of the competitive season, the MWRFU Competition Committee has released League Playoff Schedules and some competition notes to assist Member Clubs in understanding how they are seeded. There have been a few changes across many leagues this season due to several factors so please pay close attention to the schedules for your league.

As competition took place in a COVID-19 environment, the Union anticipated that some Member Clubs may struggle from week to week fielding the number of sides they typically may have in non-Covid years past which could result in higher-than-normal forfeitures. Additionally, to not penalize Member Clubs for being responsible in reporting COVID-19 outbreaks to the Union and opponents, the MWRFU permitted more games to cancel rather than force forfeitures when COVID-19 was prevalent on one side. This led to an increase in game cancellations resulting in many leagues finishing with teams playing a different number of matches than some others in their league at no fault of their own.

Given the increase in forfeitures across all leagues this year, the MWRFU Competition Committee decided to exclude forfeiture scoring from the Average Point Differential/ Point Differential Per Game calculation. This will allow the Union to more accurately rank teams based upon how they fared in matches they played and avoids “penalizing” teams who were unable to play a match. Games will still be scored 28-0 in providing the Try Bonus Point for the non-forfeiting club, but that score will not be reflected in the Points For, Points Against, and Point Differential totals. Please note that for the statistics in this article, this adjustment has not been made yet; however since this article was posted, the Standings have been updated to reflect this.

This playoff format is straight forward as all Member Clubs play ten (10) league matches over the course of eleven (11) weeks straight through November 6th. At the conclusion of league play, the team at the top of the table in both the Eastern and Western Conference will meet at the Midwest Championship in Chicago on Saturday, November 13th. The Midwest is still in conversations with the American Rugby Premiership regarding a Prime Cup Match in Atlanta, GA the following Saturday for the Midwest Premiership Champion.

In the Eastern Conference, the race remains tight with three (3) sides battling for the top of the table. Currently, the Chicago Griffins (5-1, 4.17 LPPG, 28.83 PDPG) sit atop the table with twenty-five (25) League Standings Points slightly edging the Pittsburgh Forge (5-1, 4.00 LPPG, 8.17 PDPG) and Detroit Tradesmen’s (4-2-1, 3.43 LPPG, 6.57 PDPG) twenty-four (24) League Standings Points. The Griffins and the Forge have a game in hand over the Tradesmen. Both the Griffins and the Tradesmen will travel to Pittsburgh on October 23rd and November 6th, respectively, in what’s shaping up to be a close race to the very end.

In the Eastern League, the deciding match appears to be on the schedule for this weekend as the Pittsburgh Forge (3-0, 5.00 LPPG, 43.00 PDPG) travel to Columbus Women’s Rugby (3-0, 5.00 LPPG, 37.33 PDPG). The winner of the match will win the Eastern Hybrid League and earn the spot in Women’s D1 Playoffs. The loser of the match will likely have a top seed in the Women’s D2 Playoffs (see below).

Like Men’s Division 1, the D2 competition’s playoff structure is relative straight forward. At the conclusion of league play, each Conference’s top two clubs will earn playoff spots. However, unlike in year’s past, there will be no crossover as each Semi-Final match will likely be a rematch of a regular season game with both games being in Conference on November 6th. The winners of the Semi-Final/ Conference Championship matches will face one another at the Midwest Championship in Chicago, IL on November 13th.

In the Eastern Conference, three (3) sides are clearly in contention for the two (2) playoff spots. Currently the Cleveland Crusaders (5-0, 5.00 LPPG, 23.60 PDPG) sit atop the Standings Table, but both the Chicago Blaze (4-1, 3.80 LPPG, 27.80 PDPG) and the Indianapolis Impalas (3-2, 3.60 LPPG, 20.40 PDPG) can overtake them. The three sides will compete against one another in the final three weeks of the season. Indianapolis travels to Chicago on October 16th, the Crusaders travel to Indianapolis on October 23rd and what could be a preview of the Conference Final the week after, the Chicago Blaze travel to Cleveland on October 30th.

The Western Conference also seems to have three sides in contention for the two playoff spots. Currently the Southside Irish (4-1, 4.40 LPPG, 9.20 PDPG) sit atop the Standings Table, but the Eastside Banshees (4-1, 4.00 LPPG, 22.40 PDPG) are breathing down their neck. Southside travels to Eastside on October 23rd which could be the deciding match of the season. Still in contention as well are the Green Bay Celtics (3-1, 4.00 LPPG, 18.75 PDPG) who have a game in hand over both the Irish and the Banshees.

Women’s D2 has seen the largest number of changes to their playoff structure, mainly related to the creation of the D1/D2 Eastern Hybrid League. In the Western Conference, things remained conventional with since the two leagues remained relatively the same. The #2 Seeds from each of the Leagues will travel to the #1 Seeds of the opposite League for Quarter-Final matches on October 30th.

In the East, things get a little more complicated. Effectively the after the top seed in the D1/D2 Eastern Hybrid League earned a spot in the Women’s D1 Playoffs, the next three (3) seeds (2 – 4) earn three of the four D2 spots in the Eastern Conference. The fourth spot in the East will be determined by a Play-In game on October 23rd between the two Number 1 seeds from the two “traditional” D2 Leagues in the East. The winner of this Play-In match will face the #2 Seed from the Eastern Hybrid League while the #3 and #4 seeds from the Hybrid League compete in the last Quarter-Final Match.

The four winners from this weekend will compete in the Semi-Finals on November 6th with those winners moving on to the Midwest Championship in Chicago, IL on November 13th.

In the East, the loser of this weekend’s match between the Pittsburgh Forge and the Columbus Women will likely be the Number 1 seed in the East. The Cincinnati Kelts (2-2, 2.75 LPPG, -3.50 PDPG) are shaping up to be the second seed from the Hybrid League. Both Buffalo (0-3, 0.00 LPPG, -36.00 PDPG) and Detroit (0-3, 0.00 LPPG, -21.00 PDPG) Women are winless and will play one another on October 16th. The winner of that match will likely earn the last seed from the Hybrid League in D2 playoffs with the loser earning a spot in the Women’s Bowl Competition (see below).

For 2021, the MWRFU attempted to split the Eastern Conference’s Northern League into two separate competitions to create an even four league structure in the East to match the West. With that change in hand, the Union also opted to eliminate the two-match weekends for D3 for a cross-over competition in the Quarter-Final round. Unfortunately, after all the schedules were set, a few teams dropped down or out of the newly established North and Central Leagues requiring the Union to once again be consolidated into one League. Since the playoff rounds were established and scheduled released to the other competitions, it was determined that the East League #1 would still play the Southern League #1 in the Quarter-Finals with the winner playing the combined North + Central League Winner in the Semi-Finals. Ultimately, this would have been the result if the two new leagues remained anyway. In the Western Conference, the playoff structure still sees the top teams from each of the four (4) Leagues earn playoff bids. Again, rather than doing two-match weekends at one site, the Minnesota #1 will face the Iowa #1 and the CARFU #1 will face the Wisconsin #1. The matches will be hosted by the top sides as seeded by the Midwest using the methodology described previously. The winners will compete in the Semi-Finals hosted by the higher seed remaining on November 6th before those winners head to the Midwest Championship on November 14th in Chicago, IL.

In the Western Conference, Fox Valley (4-0, 5.00 LPPG, 53.25 PDPG) also seems primed to repeat as CARFU League Winners. If they succeed, they will likely meet Oshkosh Rugby Club (4-0, 4.75 LPPG, 21.75 PDPG) who control their own destiny over the last few weeks of the season. In Iowa, the race comes down to this weekend as newcomer West Des Moines (5-0, 5.00 LPPG, 34.40 PDPG) faces off against perennial League Champion Bremer County (4-0, 5.00 LPPG, 38.00 PDPG) in what also appears to be the de facto League Championship match. The winner will face the league winner from Minnesota, which appears to have the St. Paul Jazz Pigs (5-0, 5.00 LPPG, 34.40 PDPG) in the driver’s seat to represent that League once again.

New this season is the Women’s Bowl Competition, a consolation playoff bracket designed to offer women’s clubs more opportunities to play quality matches this season. Like the D2 Women’s Competition, the Western Conference is pretty straight forward with the 4th Seeds from both the North and South Leagues traveling to the 3rd Seeds from the opposite division for the Quarter-Finals on October 30th. In the East the Quarter-Final seeds are made up of the 5th place team from the D1/D2 Eastern Hybrid League and the two #2 Seeds from the D2 North and South Leagues who will play one another in a Quarter-Final Match. The two #3 seeds from the North and South Leagues will compete in a Play-In match on October 23rd to determine who’s traveling to the 5th seed from the Hybrid League in the other Quarter-Final match. The winners of these four (4) matches will move on to the Semi-Finals on November 6th, with the games being hosted by the higher sides remaining before the winners move on to the Midwest Championship in Chicago, IL on November 13th. In the Eastern Conference, the South Buffalo Women (3-2, 3.00 LPPG, -0.20 PDPG) and Akron Women (2-3, 2.20 LPPG, -5.60 PDPG) will likely end up earning the second and third seeds for their League. The final week of the season will determine who has to compete in a Play-In match as the third seed and who gets a bye into the Quarter-Finals as the #2 seed. In the South, the lower ranked team between Fort Wayne and Grand Rapids will earn the #2 seed with Dayton Area Women (1-3, 1.00 LPPG, -14.50 PDPG) likely to earn the #3 seed and must compete in the Play-In Round on October 23rd.

In Men’s D4, the winners of each League will earn playoff bids. In the Eastern Conference, the #1 Seed from the Buckeye League will play the top seed from the Northern League in a Semi-Final match hosted by the higher side on November 6th. In the Western Conference, the top side from the Iowa League will play a Quarter-Final Play-In match against the #1 seed from the Minnesota League on October 30th. Both Iowa and Minnesota have D3/D4 Hybrid Leagues that required teams to declare their division prior to the start of competition. The winner of that match will play the top seed from CARFU in the second Semi-Final Match on November 6th. This match will also be hosted by the higher ranked side. The winners will face one another in Chicago, IL at the Midwest Championship on November 13th. 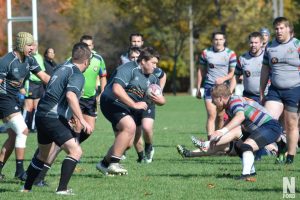 [CHICAGO, IL] – Following the announcement of the Union-wide realignment,[...] 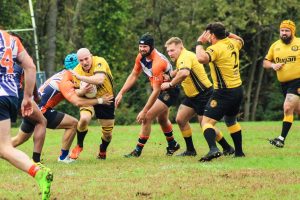 [Chicago, IL] – With league competition wrapping up around the[...]