[CHICAGO, IL] – The Midwest Union is excited to announce that it is partnering with Midwest Youth Rugby to bring back the Midwest Thunderbirds Youth program.  Featuring U19, U17, and U15 boys programs, the Youth Thunderbirds will focus on development, identification, and promoting the best Midwest players into USA Rugby’s HP pipeline.

Players will primarily be drawn from the traditional Midwest footprint and the program will cast a wide net, taking players from all levels of competition and ability.  The program will be led by Head Coach Eddie Abel.  Abel spent the last five years as head coach of EIRA Midwest, and he will be bringing almost the entire EIRA Midwest coaching staff with him to the Thunderbirds.

The Thunderbird Youth program will offer traditional high-performance tours for elite Midwest players, but unlike the Thunderbirds Senior teams, it will also offer an expanded program that gives opportunities for all interested players.  As Abel noted, “EIRA provided great opportunities, but such a national program will only have so many spots for athletes from the Midwest when they tour internationally, compete in 7s events, or hold residential camps.  A select few players going to an elite camp is great for those athletes, but it doesn’t do much to raise the level of play across the Midwest.  This new Thunderbirds program increases access for players from our region for high-level events, while also providing opportunities and development for all youth players in the Midwest.”

In some ways, the Youth Thunderbirds will operate like the other traditional domestic academies.  There will be open camps for skill work and identification.  They also hope to build on the successful Winter Camp that John Harley and Marian University hosted in 2020.  Players were turned away last year after the camp filled up, but the Thunderbirds will return to Marian December 18-19, 2021, with enough space to expand.  The Thunderbirds will also participate in June domestic all-star events and July international tours.  “We’ve gone to Denver and other places with our Midwest teams.  Tours like that will absolutely continue.  My philosophy has always been to play the best teams, and we’ve won a lot more than we’ve lost, so I don’t plan on abandoning that approach.  But now, we’ll supplement those teams and tours by offering more opportunities for players of all levels, a big tent where players can play and improve, that will be our guiding principle.”

The program has the Midwest Union’s full support.  Midwest President Al Lucas sees a potential boom for the colleges and clubs in his region.  “We hope this program trickles up to the college and senior clubs as increasing player retention post-high school is something that benefits everyone.  After looking at the success Eddie’s EIRA Midwest program had in keeping players active after high school, that’s something we hope will carry over in a big way with the Thunderbirds Youth program.”  Bill Stevens, the Youth Director on USA Rugby’s Board of Directors, echoed Lucas’ excitement.  “I’m happy to see the Midwest Union get behind an HP program for the youth in their region, a dedicated Thunderbirds program will only strengthen USA Rugby’s growing HP pipeline.”

To that end, Abel has already enlisted various college coaches from a myriad of programs.  Abel’s EIRA Midwest program leaned on college coaches like Harley, John Fox from Thomas Moore, and Gary Anderson from the University of Kentucky.  The new program will involve even more college coaching talent, including new Arkansas State Head Coach Jake Mizell and others.  “We’re going to work directly with the college coaches, I want all these guys to know what is out there.  But we won’t stop there.  I’ve already begun discussions with groups looking to bring MLR teams to the Midwest.  I think the MLR will expand into the Midwest at some point soon, and when it does, we want to be ready to work with those teams to ensure players get the proper exposure.”

The big-ticket item for the Thunderbirds will be the supplemental content between assemblies.  “We’re not just going to parachute in for a two-hour clinic, take your money, and then disappear for eight months.  We’re going to offer real, year-round programming for all players who want it.  I think the pandemic has shown that you can use technology to reach players anywhere and anytime.  We don’t have to assemble to improve, we can offer year-round programming for mental skills, strength and conditioning, diet, and film analysis; we could even use video to micro-target skills without players ever needing to leave their home.”  The supplemental program will put an emphasis on teaching as opposed to coaching and the programming will incorporate the latest empirical research to maximize effectiveness, train smarter, and holistically develop better athletes.  “When we assemble, we spend a lot of time coaching, but what we really need to do with this age group is be teachers and not coaches.  Hopefully, we can put that coaching/teaching ratio where it needs to be for youth players so that we can set these young men up for success as they age up.” 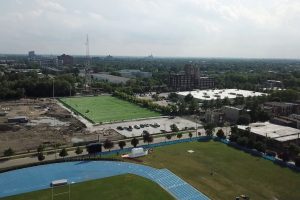 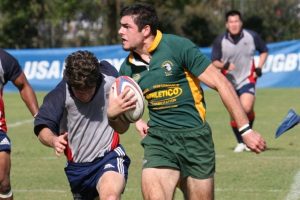 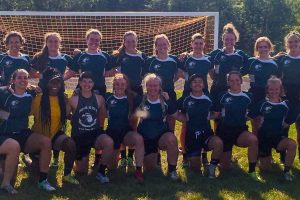 MWRU Women's U-23 Thunderbirds after competition at the 2019 Can-Am Rugby Tournament in Saranac, NY.