The Midwest Rugby Union is pleased to announce details, including many upgrades, to this year’s Midwest XVs Championships.

The Union will once again be hosting the event at the Chicago Blaze Rugby Facility located just southwest of downtown Chicago in Lemont, IL on November 12, 2022. The Blaze facility has hosted the last several Championship events and features four full rugby pitches, a beautiful clubhouse, and on-site parking. The clubhouse features full player locker rooms with showers, a training room, and a full-service bar for players and fans. The Union couldn’t be thrilled enough to once again be hosting our biggest event at one of the greatest rugby facilities in the country.

The Union is excited to announce several new enhancements to the Championship Event meant to improve the experience of participating players, family and friends in attendance, and even those who aren’t able to come to Chicago for the event.

The Illinois Bone & Joint Institute will be providing athletic training and orthopedic care to players competing. Founded in 1990, IBJI is one of the largest orthopedic group practices in Illinois. With more than 150 physicians in every orthopedic specialty, IBJI offers care for children and adults from some of the most accomplished and respected orthopedists in the country. IBJI’s more than 100 locations in Chicago and the suburbs make it easy to access complete care.

Thee Union has partnered with American Rugby Outfitters, the leading retail and wholesale distributor of authentic rugby apparel and jerseys in America, to be the official apparel vendor for the tournament. ARO will be on-site to provide players and spectators with extra rugby equipment and plenty of on and off field rugby wear. They will be offering official Midwest Rugby Union clothing as well as official Championship Tournament merchandise for this year’s event. ARO is also providing the referee kits to our top-notch referee crew and the match balls for the day’s competitions.

Finally, for our members and fans of our clubs that can’t make it out to Chicago for the games, the Union has partnered with Next Level Rugby to film, produce, and stream the matches being played on Fields 1 and 2 live online via the Union’s YouTube Channel. The Women’s Festival Match and Men’s D4 Championship on Field 4 will be filmed and uploaded later that evening. Next Level Rugby produces professional rugby videos that expose the talented ruggers, and the culture that makes American rugby so good. Next Level Rugby specializes in livestream broadcasts, cinematic rugby productions, and customized social media strategies.

Look for more announcements and updated information on the 2022 Midwest XVs Championship on the event located at the Union’s Official Facebook Page. 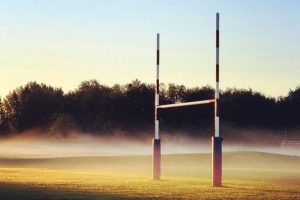 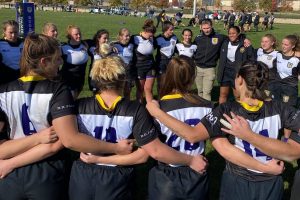 The Palmer Women huddle during the half of a match in the fall of 2021.

[CHICAGO, IL] – After weeks of analysis and discussion, the[...] 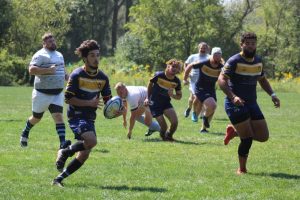 [CHICAGO, IL] – As the MWRFU approaches the home stretch[...]